Avery’s success story is actually his family’s celebration of how much Avery has blossomed this past year.  Born as a micro preemie at 25 weeks, Avery, known as “Baby Hulk” in the NICU, went home at 4 months old.  At about 6-8 months

old, his mom, Stephanie, noticed Avery was not meeting his developmental milestones, even for his adjusted age.  Inability to use his left hand and not tolerating being on the floor inhibited Avery from gaining any motor skills.  His mom brought her concerns to Avery’s doctor.  No referral was made, so Stephanie, following her instincts, made the call to Easter Seals Greater Houston’s Infant Program to request a developmental evaluation.  The evaluation showed Avery was severely delayed in all areas of development.  Last October, Avery started receiving both PT (physical therapy) and OT (occupational therapy) services.

Avery began to advance quickly in his skills, with his mom, his dad, Arick, and therapists working together.  At 17 months old, Avery was diagnosed with cerebral palsy and a right side brain malformation called polymicrogyria, which affects the left side of his body.  How amazing to see the progress Avery has made
in such a short time span.  His endearing smile and enthusiasm light up the 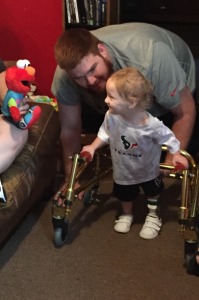 whole room.  Avery is such a hard worker and his mom, dad, big sister, Abby, and stuffed toy, Elmo, are great motivators.

Through Easter Seals’ Infant Program, his mom was given information to access doctors who could provide additional medical care such as botox injections and orthotics.  His mom stated initial botox injections Avery received this summer made a difference in his ability to use his left arm and leg after just one week.  As he is now able to crawl, pull to stand, use a walker with assistance, and finger feed, Avery has a whole new world to explore.  These new skills have also enabled him to chase after his sister, who he absolutely adores.

Though Avery had vocal cord paralysis from the intubation in the NICU, he is now able to make sounds.  In the past 6 months, Avery has begun imitating sounds and says some single words such as “ball”, “bye-bye”, and “Elmo”.  His mom related what to her was a “light bulb moment”.  Avery picked up a hairbrush on his own and brushed his hair.  That one simple act brought his mom to tears as she realized Avery was able to understand the environment around him.  In all his accomplishments, his parents are there to cheer him on and clap for him.  Avery joins in also, clapping, smiling, and blowing kisses.

When asked about this past year, Avery’s mom replied, “If it wasn’t for Easter Seals, Avery would not be who he is today.  He wouldn’t be able to stand up or try to walk.”  She added, “And I don’t think he could have had two better people (Leanne Armel, PT and Jackie Wooten, COTA) to do his therapy!  I can tell they are as invested in him as we are.”