Brianna was 17 months old when she had her first Easter Seals Early Childhood Intervention evaluation.  Mom had made the referral as she had concerns with stiffness, lack of use of the left hand, and Brianna not walking.  During the evaluation, Brianna was inquisitive, yet determined.  She wanted to do things her way and she was not about to let the ECI team tell her what to and she made sure the ECI team knew this.  During the initial evaluation, the Early Childhood Intervention team noticed that Brianna was using her right side more than her left side and asked mom about Brianna’s medical history.  According to mom, pregnancy and labor were uncomplicated and her pediatrician had never expressed any concerns. 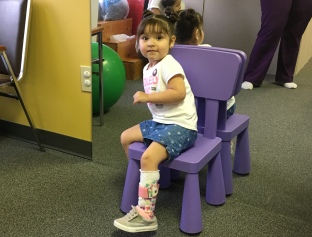 Brianna qualified based on delays in several areas of development, but primarily motor functions.  Due to the ECI team’s concern with Brianna using her right side more than the left, she was referred to a neurologist and it was then that Brianna was diagnosed with hemiparesis.  At first, mom did not fully understand the diagnosis, but the ECI team made sure to provide her with information that she was able to understand.  As the therapists and EIS worked with Brianna, they quickly realized that Brianna was bright and very determined.  The ECI providers were constantly building on Brianna’s strengths in order to get her to meet new goals and mom was happy with the progress Brianna was making.  Mom always made sure she never missed a session, even when she was pregnant with her second child, and if she was not able to present for Brianna’s sessions, she made sure step dad was present.  Fast forward to Brianna graduating from ECI at age 3.  Brianna is walking, talking, following directions, and pointing to pictures, body parts, colors, and shapes.  During Brianna’s last session, mom expressed her gratitude for all her ECI service providers Priscilla Lewis, Alejandra Torres, Lindsay Wild, Christy Lewis, Judy Rodriguez, and Lillie Medellin.  Mom expressed how grateful she was to ECI as she had learned a lot during the time she was present for the therapy sessions.  She further stated that when Brianna was initially diagnosed with hemiparesis, she faulted herself and felt guilty for Brianna having been diagnosed, but with the help of all her ECI team, she quickly learned it was not her fault and she learned the many ways she could help Brianna.  Mom also stated she felt supported throughout Brianna’s participation in ECI and had it not been for ECI, they might have never gotten a diagnosis for Brianna which would have meant that Brianna would not have made the progress she made while in ECI.   Brianna is now happily participating in a PPCD program with Alief ISD and we are sure she is just as determined as she was during her ECI participation.

One response to “How ECI Changed Brianna’s Life”