The following is a testimony was written by a parent who participates in Easter Seals Greater Houston’s Respite Program.

“Respite Care has been a godsend for my family! I have six boys, three of which are triplets with autism. To say that the amount of work they create for me is overwhelming would be an understatement! Between personal hygiene needs, special diet needs, and special education needs, there just never seems to be enough time to get anything done. With Easter Seals Greater Houston’s Respite Program my life has become manageable! I am able to take care of my children during the week, and on Saturdays I bring in a caregiver who lets me take care of everything but them! I finally have time to get my house in order, cook some healthy meals, and yes believe it or not- have an hour or two of me time! During the pandemic this was especially helpful! Having the triplets at home 24/7 was beyond stressful and trying to get them to complete their online academic responsibilities was pretty much impossible! So to have a break one day a week from everything was literally a small piece of Heaven! I am extremely grateful to Easter Seals Greater Houston and their Respite Program for providing my family and I with this monthly relief and I pray they are able to continue to offer this assistance to many families in the future!”

Respite Services provides relief options to parents who provide ongoing care of their family member who has a disability. Learn more about this crucial service that helps both the caregiver and their loved one today.

The following blog was written by the Easter Seals Greater Houston’s BridgingApps Team.

As school gets geared back up, you may be like many parents who are looking at the last few years of their teenager’s school years and asking themselves questions such as, “What happens next?” or “Are they prepared for adulthood?”.  If you need guidance getting your teen ready to transition to adulthood, our website, www.TexasYouth2Adult.com, is a great place to start!

TexasYouth2Adult empowers parents by giving them the questions they did not know they needed to ask in lists organized by age and easy-to-search categories including Medical, Education, Social & Recreational, Legal & Advocacy, Financial Management, Independent Living, and Employment. So for example, for a task categorized as Medical, they know to start with their child’s physician when asking questions.  Because TexasYouth2Adult is organized not only by categories, but also by lists created based on age ranges, parents are able to look ahead so that they can be prepared for discussing transition before the school waits to begin the discussion, which is often right before the student’s 14th birthday.

TexasYouth2Adult also contains a wealth of articles and apps related to transition needs.  For example, maybe you or your adult child needs to notarize a document.  Did you know there is an app that allows you to have certain documents notarized using the camera on your mobile device?  Check out the BridgingApps review of Notarize to learn more.  Maybe your young adult needs assistance reading certain materials for class or for their jobs?  In this case, a text-to-speech app like Speechify could be a great tool for them to have on their smartphone or tablet.

To learn more about helping your loved one move from childhood to adulthood, visit www.TexasYouth2Adult.com and create a free account so that you can access the recommended tasks lists and all of the helpful articles.  For more suggestions on recommended apps or to search for your own apps, visit www.BridgingApps.org.

The following was written by an Easter Seals Greater Houston client parent whose adorable little girl is participating in the Early Childhood Intervention Program.

Meet Melody! She is the baby of her family and the youngest of three girls. And she has each of us wrapped around each one of her precious, short, little fingers.

Melody has been a surprise from day one. It was a surprise to find out that we were expecting again at that time and even more of a surprise when we received a prenatal Down Syndrome diagnosis at 10 weeks of pregnancy. Again and again, during her development in the womb we came close to losing her, but each time she pulled through. God protected her. Knowing she would be born with multiple heart issues, we carefully planned her birth at a trusted hospital where her care team, whom we worked with during pregnancy, was ready and waiting for the big day. I was not expected to go past 36

weeks of pregnancy but again Melody surprised us and waited until just two hours past her due date to make a shockingly fast and extremely dramatic appearance in her Mama’s bathtub at two in the morning with only her mommy and Daddy present. No time to get to the hospital and we barely had 911 on the phone when she decided to join us in great haste. There she was, our beautiful little baby with tons of curly dark brown hair and gorgeous brown eyes. It was a terrifying experience but thrilling to finally meet her! Talk about surprising!! By our God’s grace she was born safely and pinked up and started breathing on her own right away. It took 45 minutes for an ambulance to reach us and in that time we just held her wrapped up in a towel, cried and prayed.

We had had lots of time to prepare since we had an early prenatal diagnosis and so while she was still in the NICU we made contact with Easter Seals Greater Houston’s Early Childhood Intervention and requested an evaluation for as soon as possible once she was discharged. Those days were so very exhausting with all of the feeding difficulties she had so I cannot remember the exact age that she was evaluated by these caring people with Easter Seals’ ECI program but I do know that it was swift and we started both physical and occupational therapy right away. Melody has been such a little warrior princess all along and it has been thrilling to watch her meet milestone after milestone, while we have faithfully worked​alongside our therapists. Even though for the first six

months she had two holes in her heart (as well as two other heart issues) multiple illnesses, both a lip and tongue tie (which were both revised at around eight months old) and serious feeding struggles, Melody continues to surprise and wow us; like when she suddenly decided to start breastfeeding at eight and a half months old when her mama had given up the dream of getting to share that bond with her. She nursed for six weeks and then she was done but those were priceless times.

She is truly such an incredible gift from God! One we never even thought to ask for ourselves, but He graciously gave anyway, knowing that we needed her in our lives. She (and her doting big sisters) fills our every day with so much joy! Melody is currently just past fourteen months old and is sitting up beautifully, crawling as fast as lighting, pulling up on everything and showing some real interest in walking! She gives enormous hugs and kisses all day long, waves hello and goodbye, drinks through a straw like a champ, has learned how to fake laugh, blows the sweetest kisses, claps her darling, square shaped, little hands and says “Yay!”. She also says “Dada” all the time much to her father’s delight. She loves everyone and literally draws crowds wherever we go. Grocery shopping with her is a nightmare. Ha! Our family is so very thankful for the Easter Seals’ ECI program and look forward to each session we have with our wonderful therapist. Melody is going to do great things with her life and Easter Seals is making for some fantastic stepping stones.

Children’s Therapy Program There for Every Step

The following post was written by a clients mother: 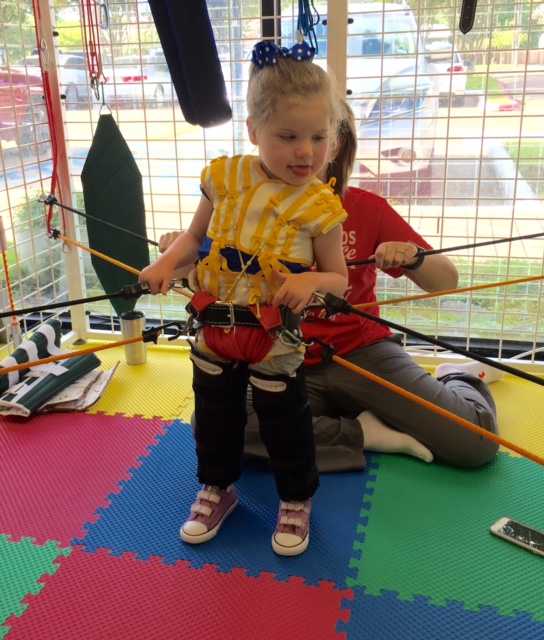 My daughter is 5 years old and diagnosed with a rare disease that causes vision impairment, epilepsy, low muscle tone and developmental delays. Her name is Aubrey and she is diagnosed with a mutation of the DNM1 gene. Her condition was undiagnosed for the first three years of her life. We initially received state sponsored physical, occupational and speech therapy. We also sought private therapy through a local hospital. Aubrey made extremely slow but steady progress. She could not sit unassisted or maintain weight on her legs. I spent time researching therapy and staying connected with families that have children with similar conditions. I was told about TheraSuit therapy by a family in Australia. Their children benefited from this intensive therapy. I then asked Aubrey’s health providers about the specialized physical therapy. I was put in contact with a local family that had a great experience with Easter Seals Greater Houston. 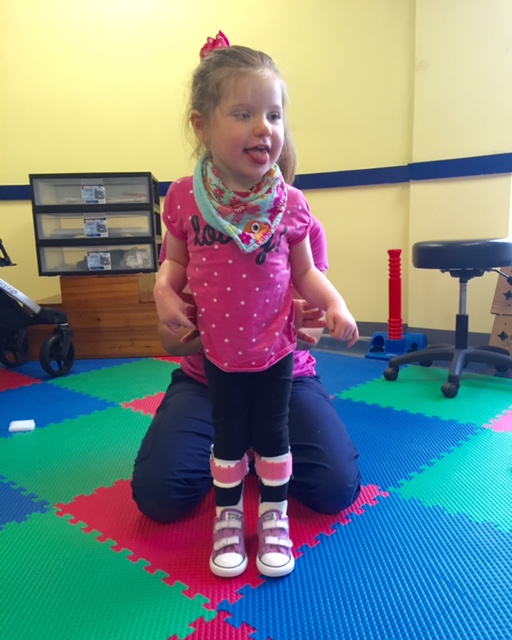 “We must be willing to let go of the life we have planned, so as to have the life that is waiting for us.” – E.M. Forster