The following was written by Easter Seals Greater Houston’s client Celeste who has received and is training her service dog through our Veterans Service Dog Program with the expertise of our Texas Veterans + Family Alliance partner My Service Dog, Inc.

“I want to start by saying thank you so much for all the work that Easter Seals Greater Houston’s and My Service Dog does for Veterans.

I knew of My Service Dog’s program but never really thought it was something that would be for me. I was still adjusting to everything that had changed for me in the last year due to my injury. A friend and co-worker, Kim Gunter, that works with My Service Dog, just happened to be at work on a day when I was having a really tough day. She sat down with me and talked to me about the possibilities of a service dog for me and gave me the contact info. I honestly did not think much more about it until she gave me two names and phone numbers and asked me to just call. So, I did.

I first called Easter Seals Greater Houston’s Veterans, Service Members and Military-Connected Family Program. Talking to Dr. Jennifer Wright was wonderful, she was so kind and compassionate as she explained the various programs available through Easter Seals Greater Houston. She even assured me at the end of our conversation that while I was feeling like I would never be the same again, to remember to be kind to myself. It was a great conversation. I then reached out to Allie Keaton with My Service Dog and talked about what I was hoping to gain from the program. She talked me through what to expect, the work that was involved, and assured me that while it sounded overwhelming that she would be there every step of the way. And she has been.

After I was approved for the program, it still did not really seem real. I was receiving great information weekly and starting to see all the cute puppies in training in the Veteran’s Train Your Own Service Dog class. I thought I was getting a puppy out of an earlier litter but none of them tested out to be a service dog. I was stressed and disappointed at the time but once they showed me the testing video where my Gogo was selected, it all made perfect sense. And now that I have Gogo, I know that she was meant to be mine.

Gogo is the youngest puppy of the class. She has been a blessing and a handful. I’m not saying that she is not a lot of work because she is! But she is a joy and has helped me already on days when I am not feeling my best. Allie has been amazing through this whole process. She checks in on us regularly, we train in person, and have a weekly online group class. I know just 3 weeks into having my Gogo that I would not be able to do this without Allie’s support. Gogo has been to restaurants, stores, two of my offices including a spa and everywhere that she goes she turns heads, and everyone falls in love. She was welcomed at my main office with a baby shower! My co-workers struggle to let her train and not baby her, but we are all learning together so we can make sure she is the best at her job.

We still have a lot of training ahead of us, but every week Gogo makes great progress, and we are working hard at everything we have learned together. I never knew how much I needed the support and love from my Gogo in training and from My Service Dog and Easter Seals Greater Houston. Thank you does not seem like enough!”

Thanks to Dr. Jennifer Wright and Tim Stroud from Easter Seals Greater Houston Veteran, Service Member, Military-Connected Family Program as well as a host of donors, one Houston Veteran slept in a REAL bed for the holidays. After connecting to the homeless Veteran, Dr. Wright reached out to others for help. As a frontline worker, Dr. Wright’s first action was to ensure the Veteran was in a safe place and had the right mental attitude. In the military, safe is an objective term. He was living in his car with his two dogs and since they are his emotional support animals, he would not go live in a shelter without them.

This was all the information that Dr. Wright needed to know. She sprang into action and contacted her internal team and then the resources in their network. Since Easter Seals Greater Houston is funded under the Texas Veterans + Family Alliance Grant program from the Texas Health and Human Services Commission, they work with over 250 local and regional Veteran Service Organizations.

Within a few days, the Veteran was living in a home, had food, furniture, clothes, dishes and all the comforts of home. The Veteran now works at a “no kill” animal shelter and is very thankful for the case management and care from our TVFA Network. When the supplies were delivered, the Veteran remarked through teary eyes that this was the nicest bed he has ever slept in. Rest well warrior.

It is our honor to support a Veteran and to foster just a little bit more of hope. The Veteran, Tim Bergdoll, gave us permission to share his story and indicated that this was the best Christmas ever!

“Being out of my car, sleeping in a warm bed, and watching Pico and Buddy enjoy their warm shower truly was a blessing.” Thank you, for your swift action! Thank you, TVFA for making this a happy-ending!

“On Christmas Eve, I was at peace knowing that this little crew was taken care of” says Tim.

Did you know that Easter Seals Greater Houston offers a wide range of programs and resources for Veterans, Service Members and Military-Connected Families? Learn more.

The Debt We Owe Our Heros

Veterans are not a monolith. They possess a variety of talents and skills and needs after the epic storm that crashed and stalled over Houston in Aug of 2017.  Hurricane Harvey was a call to action and many Veterans responded valiantly putting themselves in harm’s way once again to assist their own families, their neighbors, and the community-at-large.

They borrowed John-boats and utilized high clearance vehicles, expertly jimmying equipment for high water rescue. They guided the confused and grief-stricken with clear and simple instructions to pack a survival bag and abandon things that could not be transported to higher ground. They stood up distribution warehouses and procured supplies from a generous nation and efficiency and effectively pushed water bottles, diapers, and sanitation supplies to where they were needed most in this flooded city.

They rendered physical and psychological first aid with compassionate and comforting expertise. They applied training, insisted on teamwork, established chains of command and networked with over-saturated emergency response systems. They warned us of the various toxic exposures in water-born illnesses, insect carried diseases and predicted the rapid growth of mold between brick and sheetrock. When they faced obstacles, they engaged in creative problem solving to invent new ways to overcome.

Technology-assisted them including Easter Seals Greater Houston’s BridgingApps program. Facebook and Instagram, walked talkie apps, even Pinterest crowdsourced ideas and speed help around a city that knew we had to help ourselves, just as we knew we depended upon each other for our literal survival. Websites were born that matched people who needed help mucking and gutting with volunteers ready to get to work clearing a path to recovery. As mountains of debris piled on curbsides, rotting in the blazing sun, the next phase of the disaster began. Once the urgency subsided, and the adrenaline supply was exhausted, aspects of community-wide post-traumatic stress became evident.

And our Veterans suffered from familiar foes of fatigue and survivor’s guilt, hypervigilance and insomnia, nightmares and relationship turmoil, numbness and self-neglect. They were triggered by the ever-present helicopter traffic that reminded them of the sounds of war. They were triggered by cramped sleeping quarters in large rooms filled with cots and chaos.  As the immediate aftermath of the disaster waxed, Veterans of the Storm named Harvey eventually went home to their own personal disasters, that were very real whether or not their own houses were damaged by the slowly receding muddy waters that had engulfed the city.

We owe a debt of thanks to the heroes that walk among us in civilian dress. Veterans hide in plain sight but still carry the weight of duty and profound responsibility to serve and protect this nation.  We owe them more than simple gratitude. 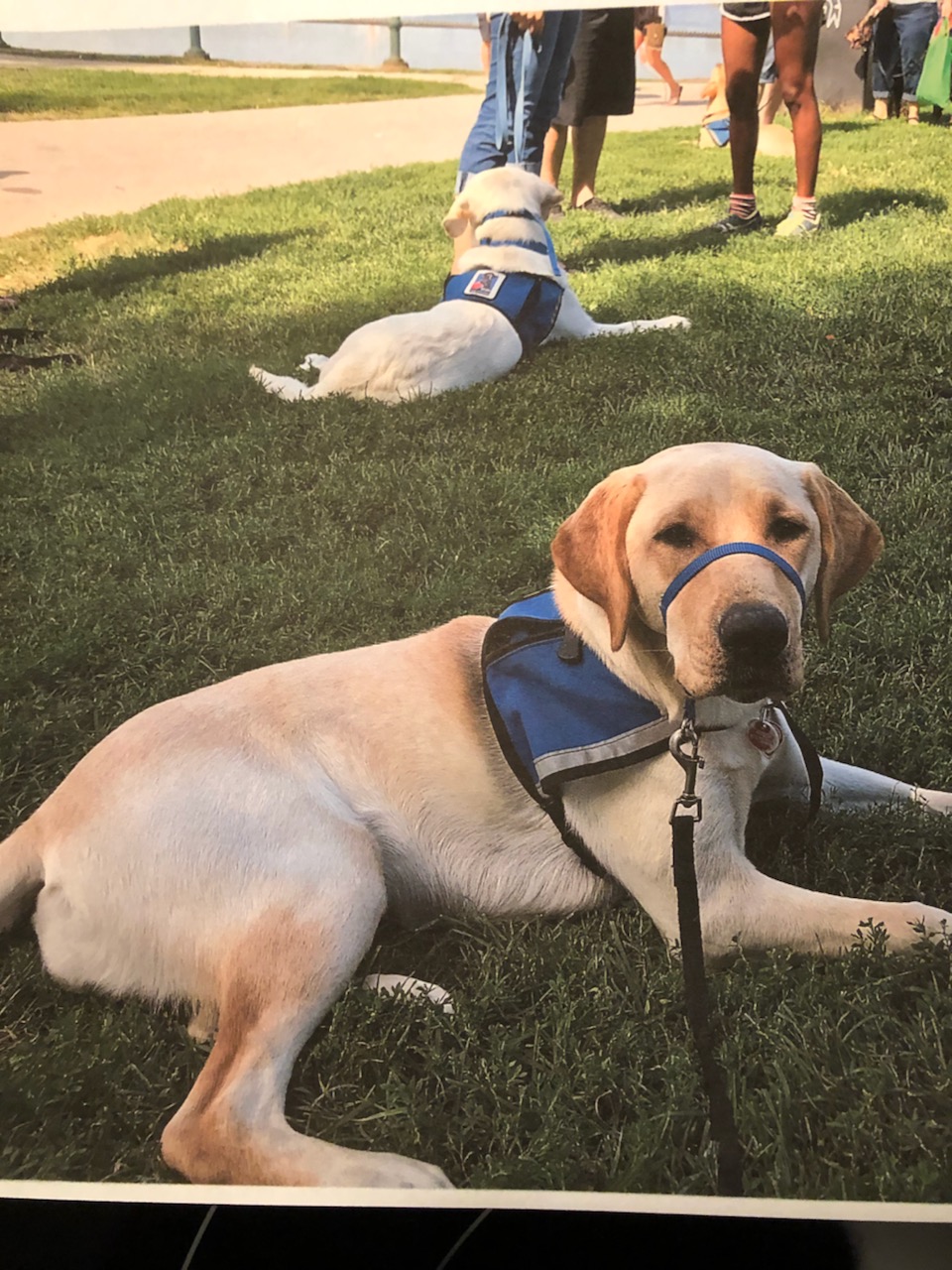 ESGH was and is proud to be at the forefront with them through Harvey and our Harvey Recovery work thanks to our community, Save The Children, The Mayor’s Fund, Americares, Freddie Mac, Simmons Foundation and so many more. (https://www.eastersealshouston.org/Programs/harvey-heroes.html) AND we are proud to be able to continue offering our veterans programs and services to our current and retired military – through our #TexasVeteransandFamilyAlliance, our #mentalhealth program and so much more as well as continuing in our efforts for Harvey Housing recovery.

Make Our Veterans Program Part of Your Unit

Usually I write about a person who was helped by the services I provide through Easter Seals Greater Houston’s Veterans Program. This time I’m going to do that with a twist, so let me tell you the story. Years ago I met a Marine and after this initial meeting our paths diverged for a long time. About a year ago, our paths crossed again at a Marine Corps birthday celebration in Houston and I learned he was a County Veterans Service Officer. After catching up we discovered that we both worked in the Veteran community to reduce the stigma around mental health, providing services to Veterans and their family members. Though our services are different, they both aim to end the suffering in silence of so many Veterans. Over this year, we have discussed all these things and one thing was clear-we have the same mission. A partnership was born that extends to the many Veterans we meet each week.

You might think this is just a story about two people in the community working together to help Veterans, but it isn’t. Yes, we benefit from the collaboration because of the confidence and trust that is shared between us. I know he will work hard and go the extra mile to help those I refer to him. He knows this of me too. Yet, the most important part of our meeting is how our complimentary services have benefited those that have served and their families. He most often refers individuals who have suffered in silence for years due to experiences from their service. Most often it is combat related. 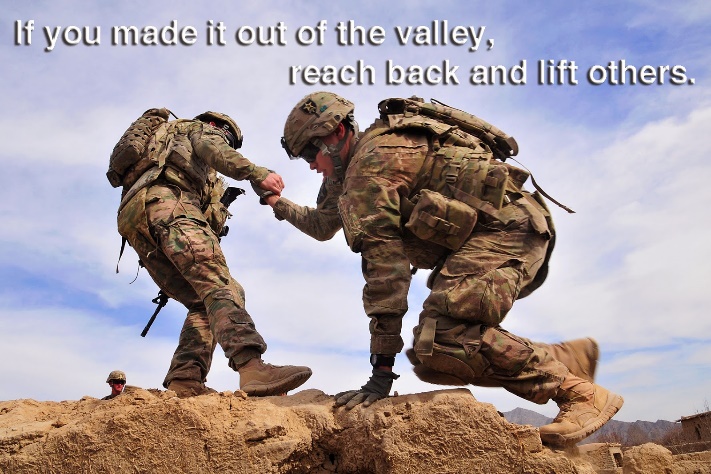 He tells them how things can get better and how they can feel better. He offers hope from someone who has been there. He helps connect them to the services they need. And they get better. When they come to our Veterans Program I give them information about what they are dealing with, the sense of isolation reduces, they feel the support, more things seem possible, and more gets done. I tell them, “You didn’t get here by yourself, so build a unit that will help you get out of this.” Easter Seals Greater Houston’s Veterans Program can be part of that unit. A County Veterans Service Officer is part of my unit. And we press forward . . . offering hope and services to those who want them and who no longer want to suffer alone.

Easter Seals Greater Houston is proud to offer a variety of services that Veterans and their families can benefit from including Fort Bend Veterans Case Management Program, Fort Bend Veterans Companion Dog Program, Bank On Montgomery County as well as the collaborative efforts of the Texas Veterans + Family Alliance.