Today we want to spotlight Cali, a high school senior from Willis High School who is finishing her senior year online and working nearly full time at Tractor Supply Company. Cali also makes time to participate remotely in our Easter Seals Greater Houston High School High Tech Program weekly chats and lessons despite her busy schedule.  Cali,  joined HSHT as a sophomore and was extremely nervous about her first mock interview day.  She had never had a job before nor had she ever applied for or interviewed for one.  As part of our curriculum, we teach students how to properly complete a job application, how to dress, how to write a resume and how to successfully ace their job interviews.

“The past two years in the program helped me a lot,” Cali said. She aced her first job interview and has been employed with Tractor Supply Company for the past 9 months and is working hard to become a Team Lead after graduation.   As a high school senior, Cali has also taken on a leadership role within her HSHT campus group, walking around the room assis

We are so very proud of our Cali Girl for all her hard work and dedication to school, her employer and to her community.  Cali is also part of the Willis HS Marching Band, FFA and raises and shows heifers through 4H.

Katherine von Haefen is a long-time United Way Greater Houston staff person.  She was at United Way when I was in high school, and she was in charge of the Kids Way Program then.  Kids Way was most definitely the thing that taught me to love volunteering in high school, and really instilled in me the idea of lifelong volunteerism.  Fast forward to today, and Katherine’s high school aged daughter, Alison, volunteered for Camp Buckaroo for the first time this summer.  Alison had a wonderful time and is now thinking about making working with people with disabilities her career, as many of our amazing teen volunteers do.  She’s already reached back out to Kenzie Richard, Easter Seals Camp Program Coordinator, to ask about volunteering during the school year!  It’s neat to think that Katherine was around when I discovered my love for volunteering, and now I’m around when her daughter’s making the same discovery – totally coming full circle.

*Easter Seals Greater Houston is proud to have been a partner of United Way GH since the days of it being called The Community Chest… a very long time! UWGH has enabled ESGH to serve so many more clients – thousands and thousands – through their and their donors support allowing us to ensure family stability, create growth, independence, and more. 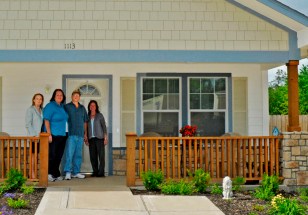 The program has closed on over 120 houses in the past ten year with no defaults ever.  Our staff pride themselves on their knowledge, educational programs, THRIVE access, their ability to tap into city/county funds and resulting success rates. Information that affects your FICO score is always important and Katy Thorstenberg, Program Coordinator with the Easter Seals Greater Houston Financial Literacy and Housing Initiative,  gets the method behind the madness as she explains here.

Move over, old FICO – there is a new credit-scoring model in town. ULTRAFICO is being rolled out and will soon be an option for lenders to use in assessing credit risk of their would-be borrowers. After reading through the changes and trying to figure out the ‘this affects-me how’ piece, one revision pops out.  With the consumer’s consent, the ULTRAFICO model would allow the lender to actually take a one-time peak into the applicant’s bank accounts.  The lender would be able to see how you manage your cash flow; i.e., do you maintain a comfortable balance in your accounts, or do you show a periodic bouncing of checks or overdrafts?

If you have established a history of responsible cash management over time, you will benefit from higher scores.  If you don’t, you won’t.  You might ask if ULTRAFICO will be a game changer when it comes to world of credit/lending.  After all, the present FICO scores already reflect how you pay your bills – on time – late, or never – and are scored accordingly.  The answer is not a big boost to many of us who have been around awhile building a credit history through loans, credit cards and general living.  However, to those who have not yet enjoyed credit card spending and taking on an assortment of loans from personal to car to lines of credit, ULTRAFICO may add points to those individuals, dubbed “credit invisibles”, now another name for millennials. In a CBS news  report by David Shellenberger, senior director of credit scores and predictive analysis at FICO cited “40% of applicants would see an upward shift of 20 points or more in their credit score”.  Of course, scores might track downward as well.  Invisible or not, at the end of the day, you just cannot get away from the fact that DEBT and how you manage it matters.

David Wright is a recent graduate of Stephen F. Austin High School in Sugar Land where he was in our Easter Seals Houston High School High Tech / RAMP (Ready to Achieve Mentoring) program since his freshman year. David has

been interested in becoming a herpetologist for a long time and knows A LOT about it. Freshman year it was hard for our staff to keep him on track because he always wanted to talk about lizards, snakes, and reptiles. We literally couldn’t get him to talk about anything else! Through the years David got better about this, was more open to participating in what the class was doing and it was obvious he was starting to pick up on the importance of our mentoring and lessons about social cues and soft skills and more. Jacquelyn Privatera Miller went with him to his interview for the internship at the Houston Museum of Natural Science at Sugar Land and he was SO professional, acted like a well prepared young adult and dressed himself so well for the interview. Everyone was really impressed. David is thriving in this environment and has opened up more and can have great conversations with people including his new co-workers. He even hugs Jacquie now when he sees her, which he would never ever have done before. So really he has just grown and matured so much in the last few years and is doing a really impressive job at his internship!  Help us congratulate David  as he is enjoying his 20 hours/week internship AND is also enrolled at Wharton Community College! Huge thanks to the museum and the museum staff for making it a life changing experience for David!

the Houston Zoo together as part of the United Way Greater Houston Day of Caring. We really couldn’t have asked for a better day as the weather was perfect, the animals were active and the friendships were forming. About twenty-five ExxonMobil employees volunteered as buddies to walk through the zoo with adults with disabilities from the Adult Services Program. Split up into groups of 5 participants with 5 ExxonMobil volunteers, they were off to explore. Following the one-mile trail, noted on the zoo map, the groups stopped to see all the animals that the Houston Zoo has to offer. 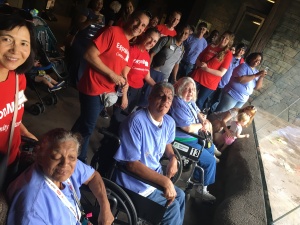 Many of our adults said while they loved watching the elephants play and dunk each other in the water during bath time, they were also excited about meeting new people.

We were so delighted that ExxonMobil asked to attend the zoo outing with us. This outing would not have been successful without their planning and organizing help, as well as their hands-on participation.

The main focus of the program is to provide adults with disabilities with a safe environment to socialize, participate in activities and explore life-long personal growth. Community outings with organizations like ExxonMobil are important contributors to improving quality of life, social skills, fitness and so much more for our clients. If your organization is interested in planning an outing with our program, please contact Ashley Nichols at anichols@eastersealshouston.org. And like XOM – if you have matching funds for your staff volunteers hours it is 2 times the support! And 2 times the fun!

Thanks again ExxonMobil and United Way!

Making a Difference One Dollar at a Time

For the past seven years, Entergy Texas customer Melissa Delgado of Conroe has participated in Entergy’s Super Tax Day events to get her taxes done for free. It is one of many events held as part of the Volunteer Income Tax Assistance (VITA) program – a program sponsored in part by Entergy.

At roughly $300 per year, Delgado has saved more than $2,100 – money she would have had to pay to a tax preparation company. That savings, along with what she gets back on her taxes through the Earned Income Tax Credit, really adds up for her family.

“We found out about this program from a couple at our church seven years ago, and we’ve been coming ever since,” she said. “We were paying so much money. It was such a blessing and still is.”

Delgado and her family plan to use their tax refund to pay for health insurance. 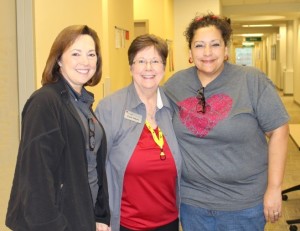 Meanwhile, a young woman named Ashley returned to get her taxes done for a second year – a year after tax volunteer Carmen Phillips with Easter Seals Houston‘s Housing and Financial Literacy Program gave her a packet of financial education materials that taught her how to create a budget and track her expenses.

“After last year’s event we spoke a couple times via phone, but I did not hear from her again until she walked up to my table,” explained Phillips, who works for Easter Seals of Greater Houston. “She immediately recognized me and told us that because of that packet and our discussions in 2017, she worked hard all year sticking to her budget worksheets and tracking her spending – so much so that she was able to purchase her first home!

“I have to say I was both speechless and blown away by her sincerity and candor,” she said. “I was so pleased to learn that the brief education and information received through a Super Tax Day event could have such a profound effect on a client!”

Since 2011, Entergy has been sponsoring VITA sites in all five of its operating companies – Entergy Texas, Entergy Louisiana, Entergy New Orleans, Entergy Arkansas and Entergy Mississippi. Of more than 111,125 tax returns filed, customers have gotten back near $200 million in refunds.

In Texas alone, more than 8,200 tax returns have been filed, with customers getting back more than $11.5 million in refunds. 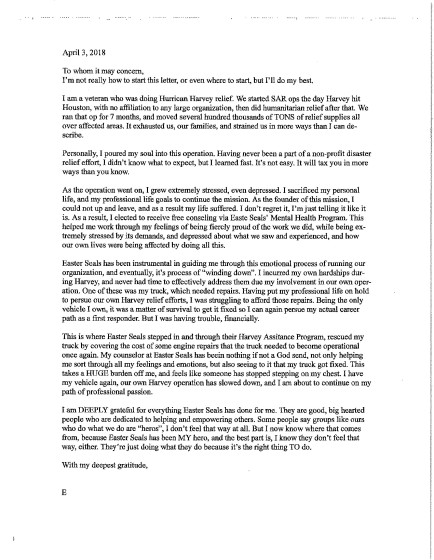 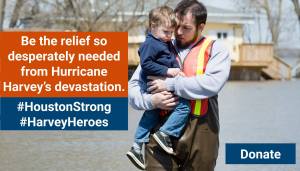 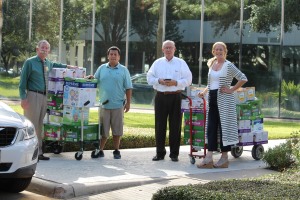